An Interview with Janni Lee Simner 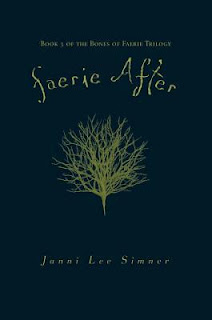 Q: Patty Campbell talks about the germ for a piece of writing being like the sand in the oyster.  What is your grain of sand?  Do you begin with character or setting or something else?

A: It varies for me, but often I start with a mood/feeling and an opening scene. For Bones of Faerie, my first YA, I began with several opening paragraphs that set a haunting tone and made me want to keep writing to find the rest of the story. I had a very basic idea to go with those paragraphs: that there'd been a war between the human and faerie realms, and that it had destroyed the world, leaving behind deadly magic. I literally didn't know anything else about the story (not even my protagonist's name!) until I wrote the rest of it. For Thief Eyes, my starting-grain was even smaller: I had a few opening paragraphs written in Iceland, where the book is set, and no idea of where that opening would lead me. I had to write the book just to find out what happened!

I once even began a short story, "Drawing the Moon," with nothing more than an opening line: "Andrew knew that the moon had stolen his parents away." I love following threads like these to see where they lead.

Q: Why do you write for Young Adults?

A: Mostly, I think I write the stories I want to tell, and those stories happen to be either YA (which is what I'm mostly writing right now), or children's books (which I've published in the past), or adult (I've also published some adult short stories). I love writing all these genres. I think YA in particular is compelling to me because it's so often set at that moment of change when characters are right on the cusp of moving into and taking control of their adult lives, a time when every decision feels like it matters. I enjoy coming of age stories, as a reader as well as a writer.

A: I was totally the brainy kid and book nerd. I still love both reading, as well as learning strange and interesting new things simply for the sake of learning them. I remain an unapologetic geek!

Q: Do you have a pet (pets)?  Tell us about it (them) and how they help/hinder your writing.

A: We have two cats, both black-and-white tuxedo kitties, one short-haired, one long-haired. The short-haired cat is set on world domination. The long-haired cat is set on finding the best napping spots. They mostly get along really well. :-) Neither seems very interested in my writing, though, and they have a disconcerting habit of leaving the room when I try to read scenes to them.

Q: What is the hardest part of waiting for a book from the end of your writing to when it is released?

A: Right after I finish a book, I want so badly to talk about it, because I'm so immersed in its world! Waiting a year or more to learn what readers make of that world can be hard. This is balanced by the fact that I really appreciate all the work that goes into each book on the publisher's side before it reaches readers, and wouldn't want my stories out in the world without it.

Q: How often do you dream about the writing you are working on?

A: I rarely have actual dreams about my books, but I daydream about them constantly. Especially in the final stages of finishing a draft, the book can begin to feel more real than the world around me, and I'll drift off to sleep thinking about it. Those moments before sleep are also one of the times I sometimes solve plot tangles that have been troubling me during the day!

Thank you so much for your time Jannie! We look forward to seeing you at the festival!

For more about Jannie Lee Simner, visit her website.

Countdown to the Festival